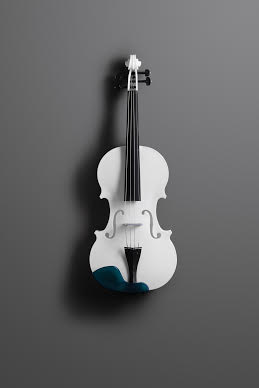 Accomplished violinist Rhett Price has been using a two century old violin for a long time now. He has performed many shows and recorded multiple tracks using his beloved violin, however when he was introduced to a new 2016 3-D printed violin it was like a different instrument. Traditional violins are made of wood and this 3d model is made of plastic.

Unconvinced that it would even sound right, he decided to give it a shot and was really surprised with the results. He went on to say this about the Formlabs Inc. 3-D printed violin:

“Plastic doesn’t vibrate the way wood does, but they did an incredible job of making the walls of the violin thin enough to vibrate and create a good tone, while keeping it thick enough so that the plastic won’t warp or cave in easily.”

The 3-D Printed violin was designed and created using the Form 2 Desktop printer at Formlabs Inc. Brian Chan was the brains behind the idea and it took a few trials to get it right adding white resin which begins as liquid and hardens allowing 3d shapes to be created. It took a few attempts for Brian to be completely satisfied that it would stand the test of Rhett Price’s demo.

Price was contacted by the company as they thought he could get the video out to a lot of people through his YouTube channel which is no stranger to viral videos. After he agreed to give it a shot, he worked over a few days to come up with a piece to use for the test and demonstration. He had to take into account how it would cope under the strains of a professional violinist as well as bring out the sound of the violin. “It certainly sounds better than any other 3-D printed instrument I’ve ever heard.”

This could be the future for schools and early education allowing the violin to become more accessible to a wider range of potential learners Including Adult violinists and children.

Check out the video below and bare in mind, this is a 3-D printed Plastic Violin!

If you are interested in learning to play the violin, check out our review of the Red Desert Violin online course here. Adult learners doubting themselves must read this article! Learning Violin as an Adult